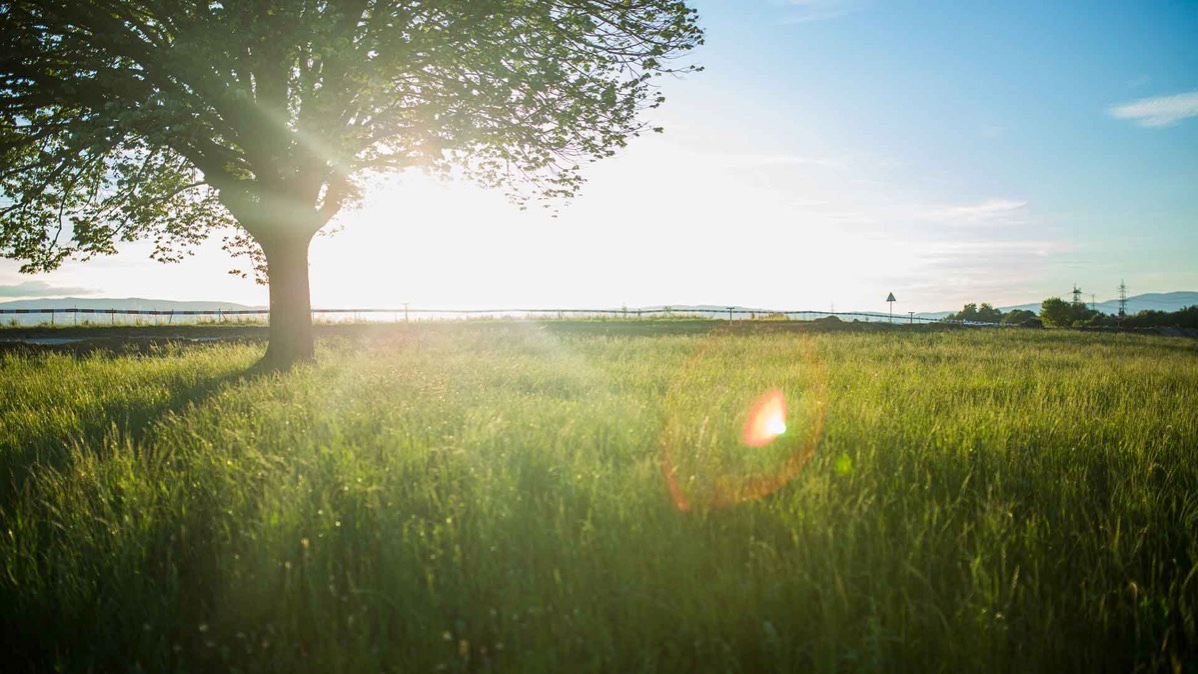 What are the options when selecting environmentally friendly plastic packaging?

Recycled polythene can come from two main sources: manufacturing waste and post-consumer waste. The majority of recycled polymer comes from in-house manufacturing waste because it is clean and free of contaminants. This is segregated into two main types: natural and coloured. Natural recycled polymer has a significantly higher value than coloured because it can be used in more end applications. To ensure consistency of the pellet it can be further segregated into polymer type, melt flow and density this gives a very consistent recycled product.

Recycled polythene can be used at 100% and has many applications [Non-Food]. It can also be blended with prime polymers dependent on the application. Co extrusion utilises recycled polymer extensively as it can be used in the middle layer thus saving cost and not having a major affect on the final product. Recycled polythene plays a major part in the packaging industry and the drive and demand continues to grow. 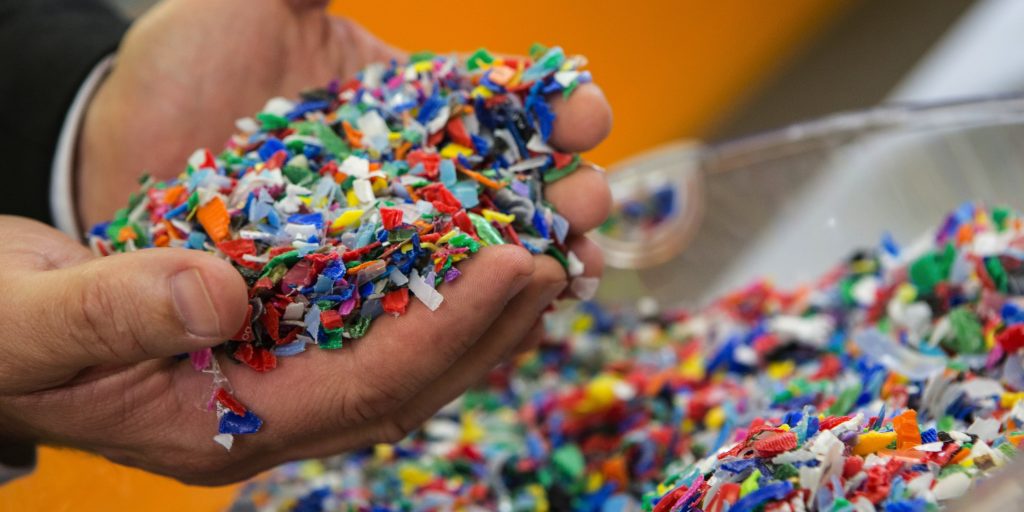 These films are made in the traditional production process with normal polymers incorporating an additive to activate an UV/Oxidative by which the film breaks down in a two-part process. Firstly, there is an initial reaction to oxidation i.e. light, heat and stress leading to a molecular breakdown of the film. Even in the dark this enables the molecules to be dampened by water and this in turn allows degradation to carbon dioxide and water and biomass by microorganisms. The process may take 6 months to 5 years in typical land fill sites

There has been a slow withdrawal from this polymer within the market place because of experts concerns over the long-term effect it has on the environment These films are being withdrawn due to contamination issues. Refer to “REPORT FROM THE COMMISSION TO THE EUROPEAN PARLIAMENT AND THE COUNCIL on the impact of the use of oxo-degradable plastic, including oxo-degradable plastic carrier bags, on the environment.” Dated 16 January 2018 and partially reproduced in the next section. 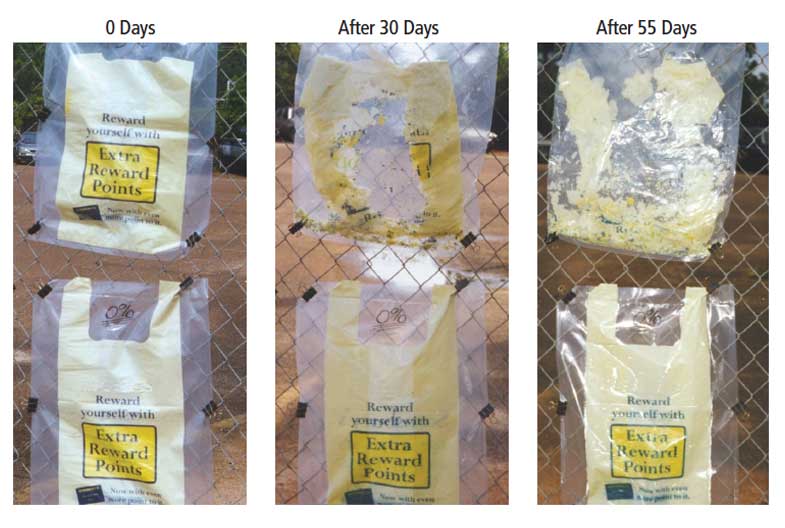 On 29 April 2015 the European Parliament and the Council adopted Directive (EU) 2015/7201 amending Directive 94/62/EC2 as regards reducing the consumption of lightweight plastic carrier bags. The main objective of this Directive is to reduce the consumption of lightweight plastic carrier bags, thereby reducing the littering of these bags and their accumulation in the environment, where they aggravate the widespread problem of plastic waste in the environment and in particular marine pollution.
Article 20a (2) of the Packaging Directive tasks the Commission to present a report to the European Parliament and to the Council examining the impact of the use of oxo-degradable plastic carrier bags on the environment and, if appropriate, present a legislative proposal. The purpose of the current report is to inform the European Parliament and the Council of the Commission’s follow-up to the mandate.

The Commission examined the impact of so-called oxo-degradable plastic on the environment beyond plastic carrier bags and underpinned its assessment by a study published in April 2017, addressing the following three key issues:

Within these areas, a number of distinct hypotheses were defined, relating to claims and assumptions from the oxo-degradable industry about the material. On the basis of evidence gathered with respect to the hypotheses, these were analysed to ascertain whether they can be supported or refuted.  The study is based on an appraisal of literature, including scientific reports, and information from stakeholders and technical experts.

In the absence of conclusive evidence of a beneficial effect on the environment and indeed indications to the contrary, given the related misleading claims to consumers and risks of resulting littering behaviour, EU wide measures should be considered. Therefore, in the context of the European plastics strategy, a process to restrict the use of oxo-plastics in the EU will be started.

Green PE is a bio-based thermoplastic resin that comes from sugarcane ethanol.

Green PE is made from sugar cane, and it is the process of photosynthesis, as the plant grows, that makes this product carbon positive. As sugar cane plant grows it captures and fixes CO2 from the atmosphere during its production and reduces greenhouse gas emission.

Green PE is as an alternative to regular fossil-based polythene, offering the opportunity to improve green credentials by using a material that is 100 percent renewable, 100% recyclable and 100% sustainable without compromising on performance.

Green PE must be blended at a minimum 35% but can go as high as 85% of the final blend.

Although the benefits in terms of sustainability and it being CO2 negative, Green PE is the same as conventional oil-based polymer and the issue of what happens to the product post-consumer has not been altered. Green PE can give a “Greener” message for the reasons stated above especially if it was used in conjunction with recycled polymers and if some of it was post-consumer.

One of the major problems with petroleum-based plastics is that they are derived from oil or natural gas which is only available in finite amounts throughout the world. Eventually, these fossil resources will run out. PLA, is derived from corn, a resource that can be renewed annually.

Bioplastic is a plastic material (physics term) made fully or partly from vegetable matter and allows the finished product to be bio-assimilated at the end of its life. Bioplastics are compostable: they decay into natural materials that blend harmlessly with soil. Some bioplastics can break down in a matter of weeks. The corn-starch molecules they contain slowly absorb water and swell up, causing them to break apart into small fragments that bacteria can digest more readily. PLA may well break down into its constituent parts (carbon dioxide and water) within three months in a “controlled composting environment,” that is, an industrial composting facility heated to 140 degrees Fahrenheit and fed a steady diet of digestive microbes. But it will take far longer in a compost bin or in a landfill packed so tightly that no light and little oxygen are available to assist in the process

The cost of this product is substantial (200% increase) against conventional fossil-based polymers, this coupled with higher costs for the printing inks and master batch to colour the film increases the cost even further.

PLA Plastic can be a great way to adopt a more environmentally friendly approach to packaging. But brands need to seriously weigh up all the pros and cons before investing in packaging overhauls to meet loose, short-term environmental claims. It is clear that there is a need to address our throwaway culture. That is consumers, businesses and governing bodies. What good comes from producing fantastic compostable packaging when the consumer does not even know how or where to dispose of it? That beautiful PLA bag could still end up in a landfill for the next 100-1000 years.

By investing in more eco-friendly packaging solutions, companies are demonstrating positive steps towards a more sustainable future. But all those good intentions could go literally to waste without the infrastructure in place to see it find its rightful, (natural) home.

Produced by Aquapak Polymers Polyvinyl Alcohol polymers are a 100% biodegradable resin poised as a sustainable option to conventional plastic film packaging. A relatively new start up company in the U.K, Aquapak Polymers Ltd, is a developer, manufacturer and distributor of a new, strong, biodegradable, recyclable, and marine-safe plastic film resin, called HydroPol, positioned as an alternative to plastics such as L/LLDPE and HDPE in a number of food and non-food applications.

Through a patented process, Aquapak was able to significantly increase the strength of PVOH, as well as make it tear and puncture resistant. Very importantly, the company developed a pellet that could work in standard PE film equipment to enable the production of the material to scale up once demand for it increases.

The material has been shown to be at least twice as strong as HDPE of equivalent gauge. Moreover, the Aquapak team successfully overcame past issues associated with recycling. Through use of a closed-loop system, the polymer can be recovered from the PVOH via a simple chemical process and re-pelletized ready for reuse. According to Aquapak, the material is non-toxic and fully biodegradable, as it is compatible with anaerobic digestion or composting systems and does need to be de-packaged prior to processing. Aquapak state that “If after use, the film ends up in waterways, it will eventually dissolve and will not harm marine life.”

Aquapak is looking at a number of commercial applications for its flexible plastic, but it is definitely suited for food packaging since it is FDA approved and acts as an oil, solvent and air barrier, keeping dried or fresh food products fresher for a longer period of time. Such applications can include bread bags, pasta and rice packets, sandwich bags and film on ready-meal containers — types of packaging of which only 3% are believed to have been recycled in 2015. Currently one of the widest uses for this material is on dishwasher and laundry tablets where it dissolves in water at ambient temperatures or above.

HydroPol films can be produced in a range of weights and thicknesses, and they can be clear or coloured and printed directly without Corona treatment — a big plus in the food packaging arena. Production of HydroPol is commencing this month at a new state-of-the-art facility in the U.K. Whilst this is a large step forward in the use of new materials it has yet to enter the non-food arena in any scale and the price differentials of the PVOH are likely to be substantial. In addition, whilst they suggest that the polymer can be utilised on standard machinery a major European film manufacturer has to date had no success with their trials and are resorting to a water quenched
extruder in an attempt to blow this material, we are awaiting their results. It has been manufactured on a small scale in Malaysia but only as a grocery style produce bag. This is another material that could be utilised in future, once it has become a ‘mainstream’ polymer and the volumes produced lead to a price point that would compare favourably to current polymer prices.

Having reviewed some of the options when considering environmentally friendly plastic packaging we hope this has given you some insight into the challenges faced by the packaging industry. We at ATL Dunbar are leading the way to introduce alternative products and processes to help our clients meet the challenges of this changing industry. We have a wide range of packaging products including pallet wrap, mailing bags and cardboard packaging on our website and we also specialise in offering bespoke packaging solutions and advice to meet our client’s individual requirements. Please do not hesitate to get in touch, our packaging experts are always happy to help.

I'm fine with this